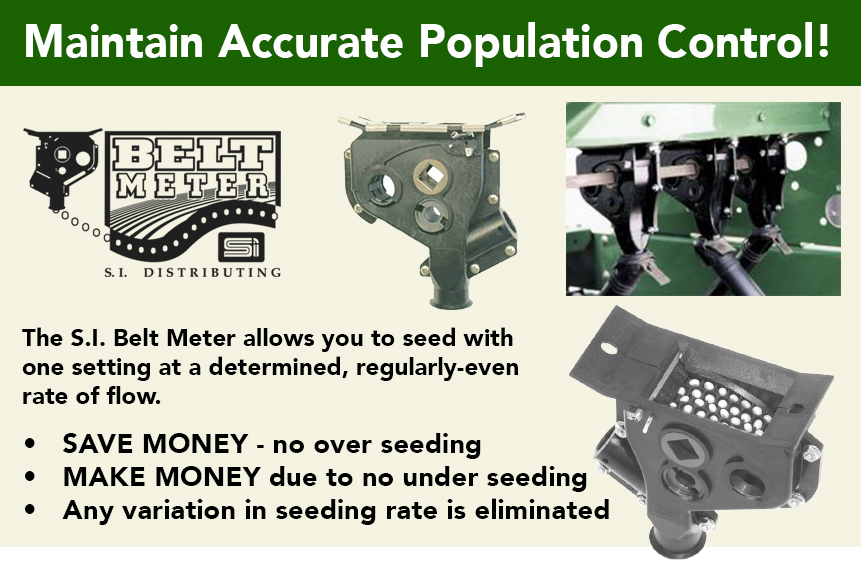 The S.I. Belt Meter allows you to seed with one setting at a determined, regularly-even rate of flow.

•     Seed damage at the meter is greatly reduced or eliminated

•     There is a positive setting by adjusting meter speed

The S.I. Belt Meter will plant a known number of seeds for every revolution of the drill shaft. Population rate changes are simply made by using a planter-type rate transmission (chart and sprockets provided) that changes the ratio between the ground drive wheel and the drill drive shaft. Changes in seed size do not affect the planting rate as most fluted type grain drill meters do.

The S.I. Belt Meter is designed to primarily plant the following crops: Soybeans at 2,000 to 4,000 actual seeds per pound, wheat and oats. The S.I. Belt Meter is not designed (and does not work well) on crops planted at low rate or of a non-symmetrical shape such as milo/sorghum, corn, sunflower, cotton and edible beans. Any guess work in setting rate is eliminated. For most seed sizes, the meter will plant your seed at the rate you establish.